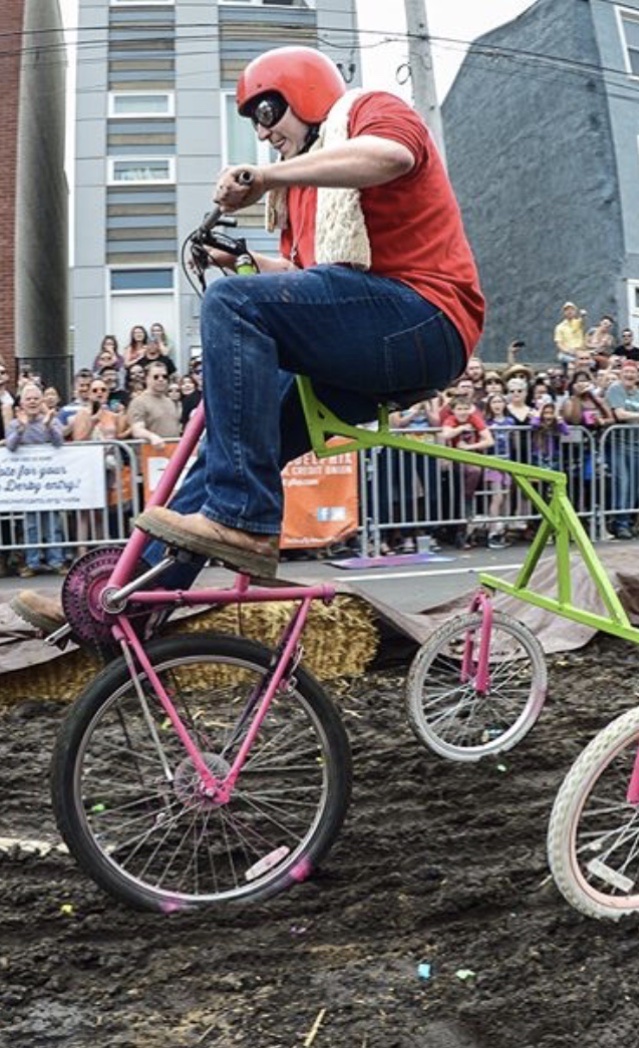 I came across a news highlight photo of the Philadelphia Kensington Kinetic Sculpture Derby in 2017. The photo was of a two person team driving a bike contraption across a thick mud pit surrounded by cheering crowds. I was instantly hooked on the idea.

When I looked up the event on the web in 2018 I had just missed the opportunity to enter the event and vowed to make an attempt at mud pit glory in 2019. Fortunately when late March 2019 rolled in I was ready to start building my kinetic bike sculpture for the May event.

Most of my research centered around freak bikes, cargo bikes, recumbent bikes, penny farthings and any of those ridiculously zany bikes you see riding across the playa at burning man festival. Back in 2011 I built a recumbent bike using plans from Atomiczombie.com which also served as a good primer on bike mechanics for the task at hand.

I have the good fortune living near the Trenton Bike Exchange which is one the best kept secrets for acquiring gently used and sometimes fully refurbished bicycles at a tremendous value. Most bikes there retail from $40 – $100 per bike and the children’s bikes can range from $20 to $40 per bike. I went to the exchange and acquired one adult bike ($60) and two children’s bikes ($20 each). 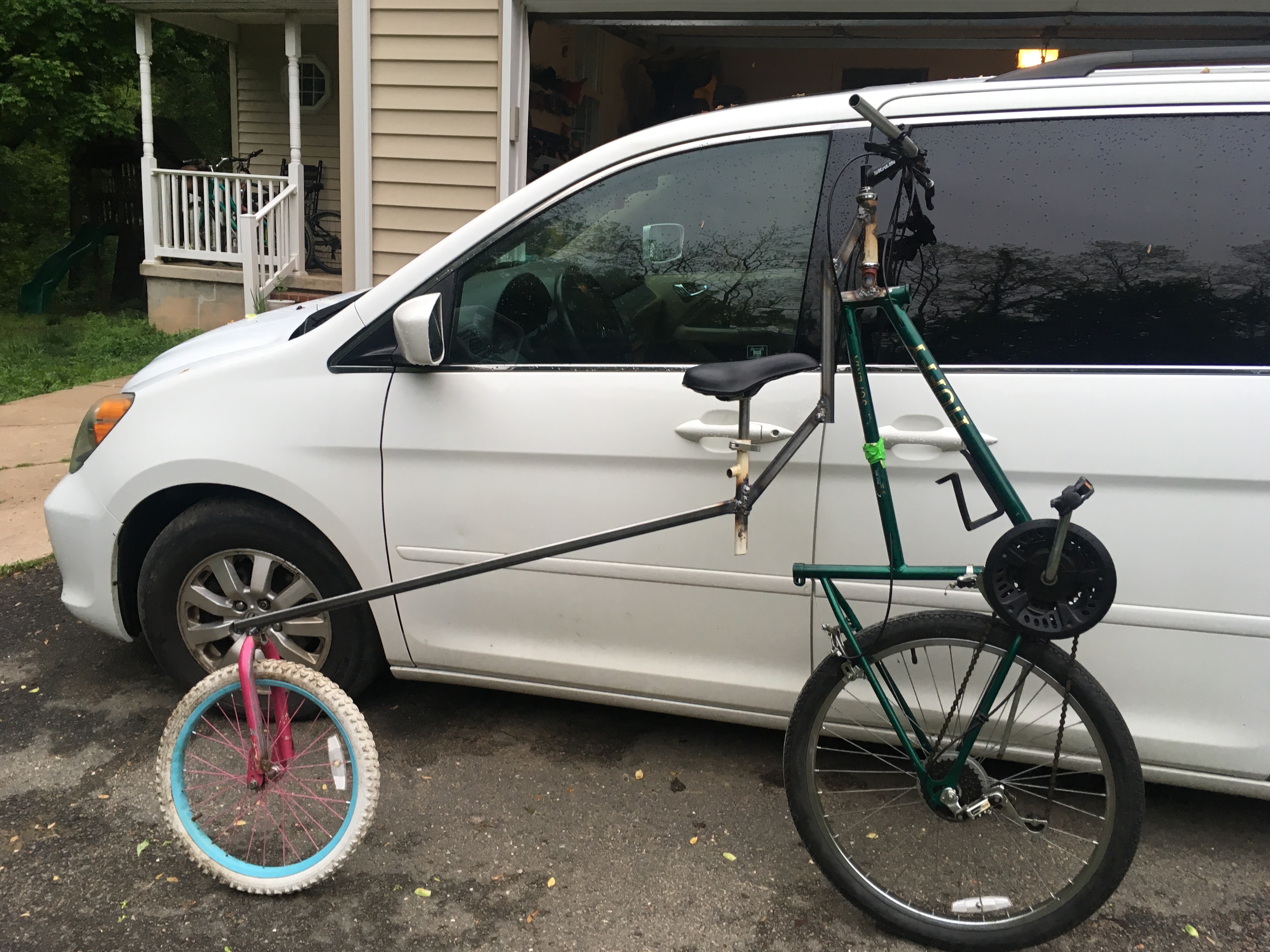 I settled upon a plan to take the mountain bike, remove the steering stem, flip the bike 90 degrees upright and then weld a steering post chopped from another donor bike and then weld the remainder of the frame to the steering column. The genius of this plan was that I could entirely reuse the existing drivetrain, existing rear brake (which is now the front brake) and reroute all of the shifter knobs and brake handles to the newly attached steering wheel directly above. Voila’!

Faux Farthing with a long body and single wheel. To be honest I don’t know how good this concept was because it didn’t get much “run time”. I had welded the front and back part of the frame to the tubing holding the seat. On the first trial run I got about ten feet down the driveway before the tubing sheared away from the bike seat post essentially snapping it in half and sending me unexpectedly onto my backside. Another observation, although I was about 3 feet higher than a regular bicycle, it felt uncomfortably high and very unstable at slow speed. I had to start by placing two Home Depot buckets adjacent to the bike on each to step up onto the seat. The Kensington kinetic sculpture derby is in an urban environment and I was unsure how much stop and start would be required. Stability and mounting had to be a design consideration! This idea of a two wheeled tall bike for this application ultimately proved untenable because a two wheeled tall bike becomes unstable and terrifying at slow speeds or even worse stopped.

The second iteration had a long frame with small rear wheels chopped from the donor part kids bikes welded to a back frame member. A giant adult tricycle. This variant worked but, a second design flaw emerged, the turning radius of the bike was too great. Turning was just too wide and I was certain I would not be able to navigate those tight Philadelphia alleyways will agility. Getting onto this monster was still also a problem without some sort of foot stool assistance.

I ended up chopping the frame down to a much shorter “tail size” and rewelded it to the primary frame member. I finished this final iteration about 3 days before the Kensington derby which gave me a modest day or two to learn how to ride this contraption. The pressure was on! 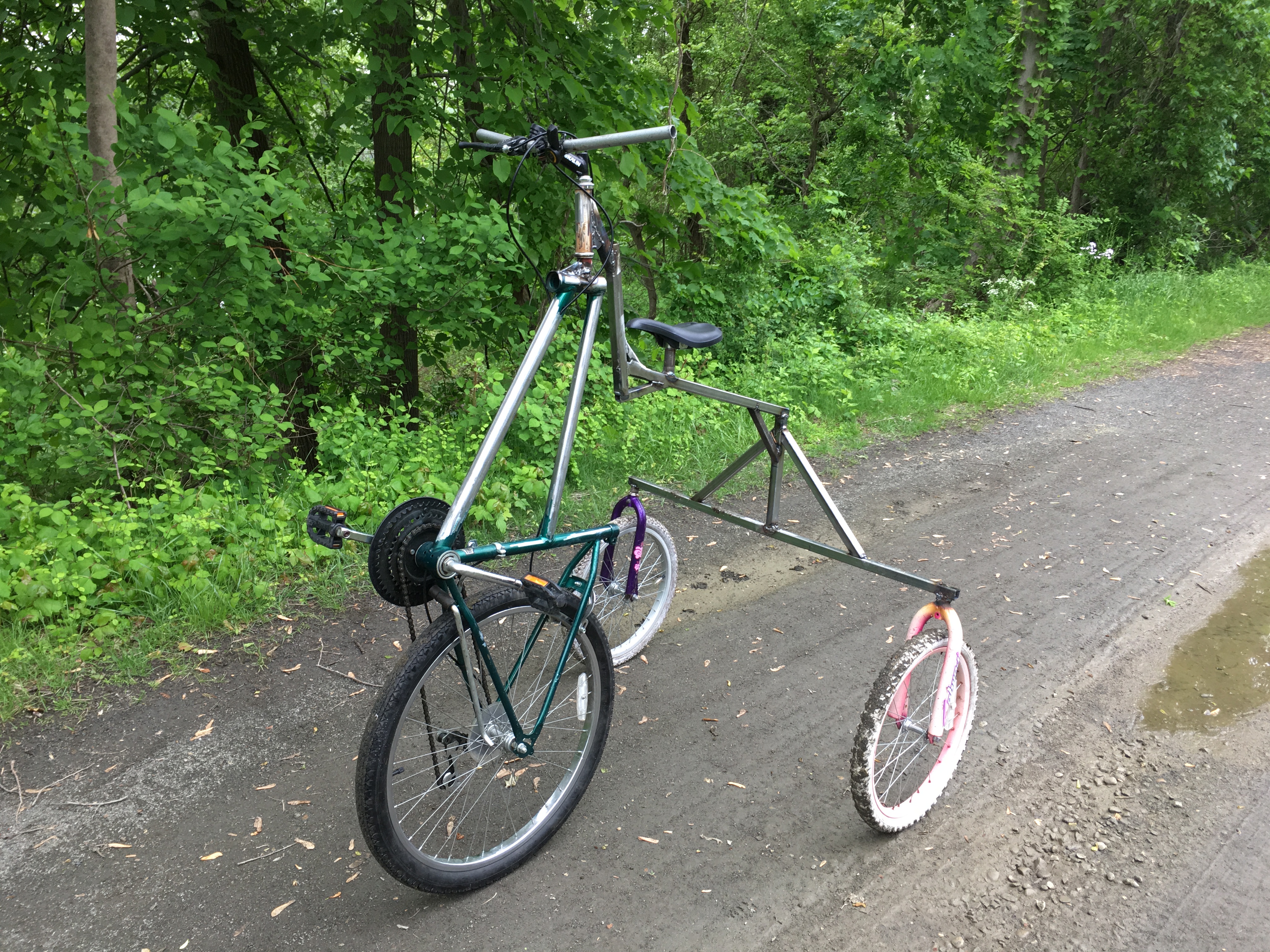 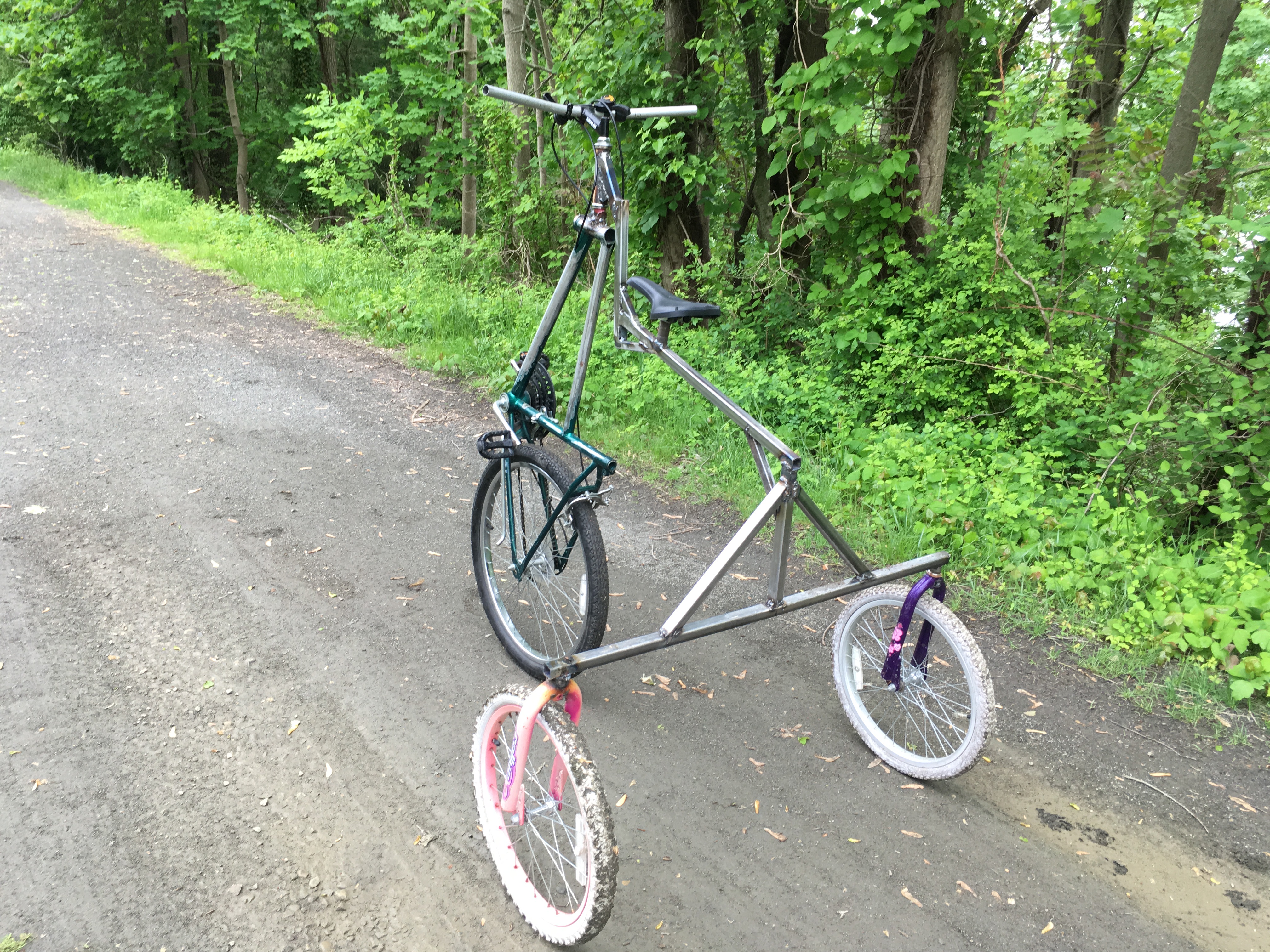 The flat back rear frame served as a perfect step ladder onto the seat. The biggest challenge was getting used to the front wheel drive wheel that also is the steering wheel. You have to pull the steering shaft on the side that you are pedaling to keep the bike going straight which takes getting used to. It’s weird at first, but after a few attempts I got the hang of it. 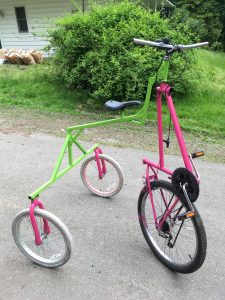 I used a can of pink and a can of neon green spray paint laying around my garage to spray up the frame to give it some flair. The bike easily comes apart and disassembled into two parts at the steering stem and was able to be easily fit into the back of our van.

The entire build took longer than expected so I was unable to make any other freak bikes for the family. To add some flair my wife and daughter went with a French girl theme and we put my son in an old Sriracha costume we had in the house. 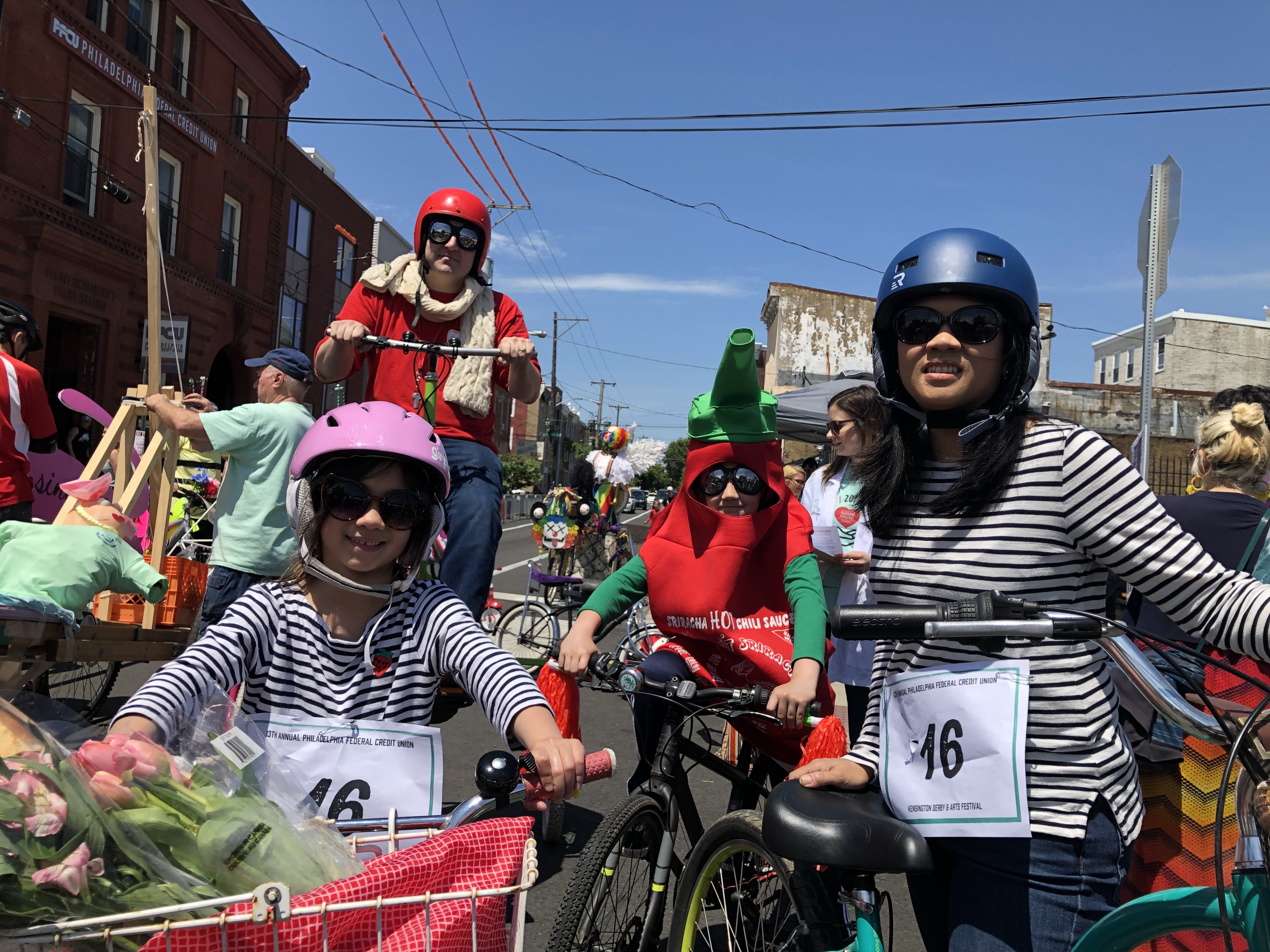 The derby was an excellent experience! Who doesn’t love a warm spring festival? There are several obstacles the parade participants must traverse, my favorite being the foam and bubbles area and the dodgeball segment with the color dust being thrown at you. The crowds cheering on the derby participants was uplifting. Definitely the most exciting bike ride I’ve ever taken with my wife and kids.

My son was able to bike through the mud pit with ease. I on the other hand was not able to make it across unscathed. 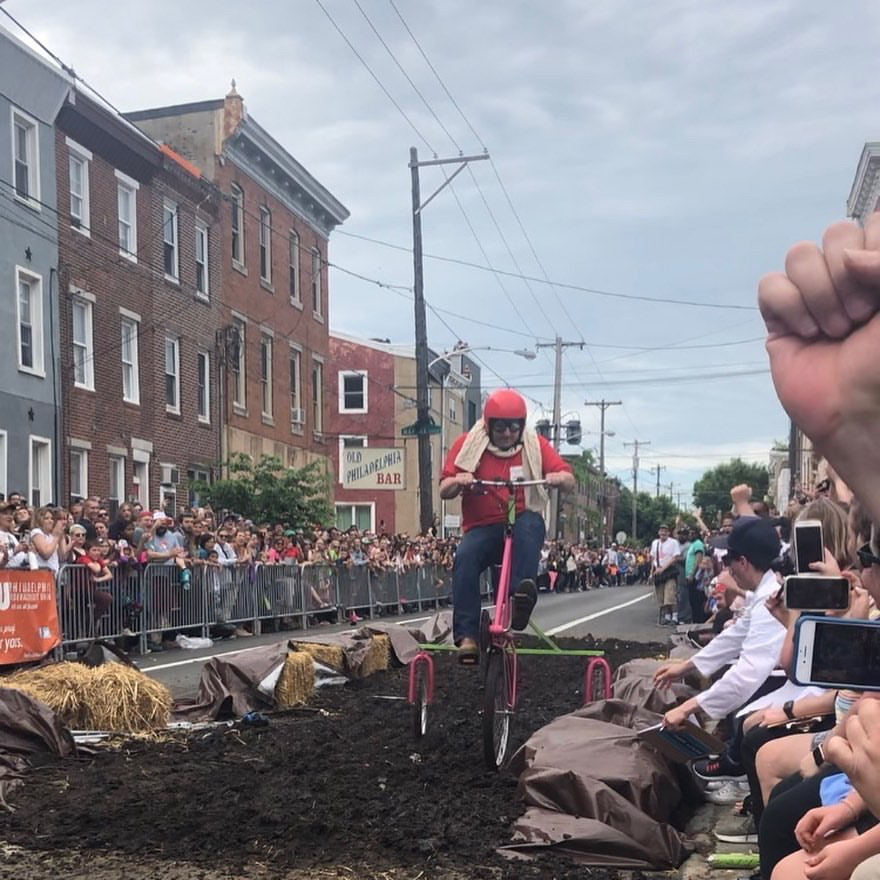 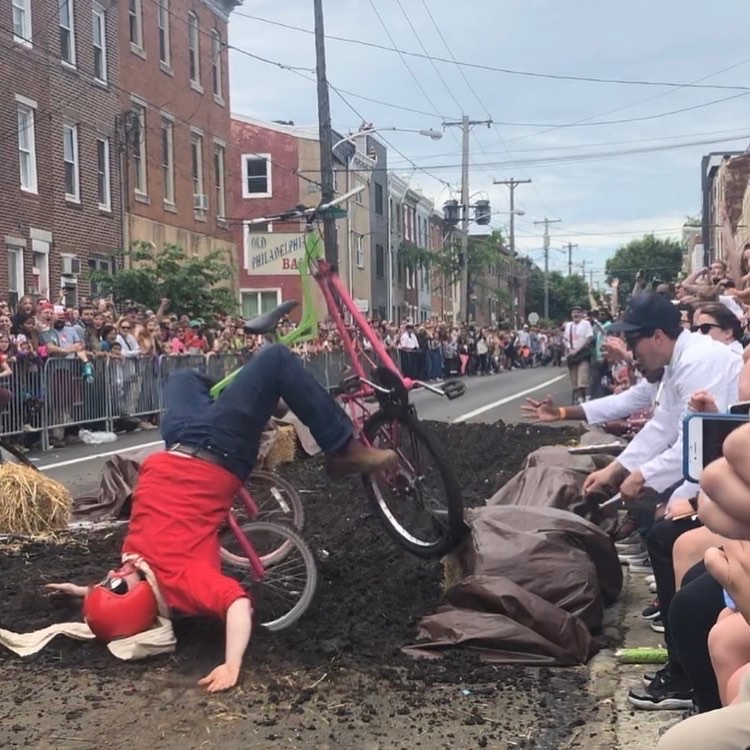 Someone on social media actually to turned this into a meme. 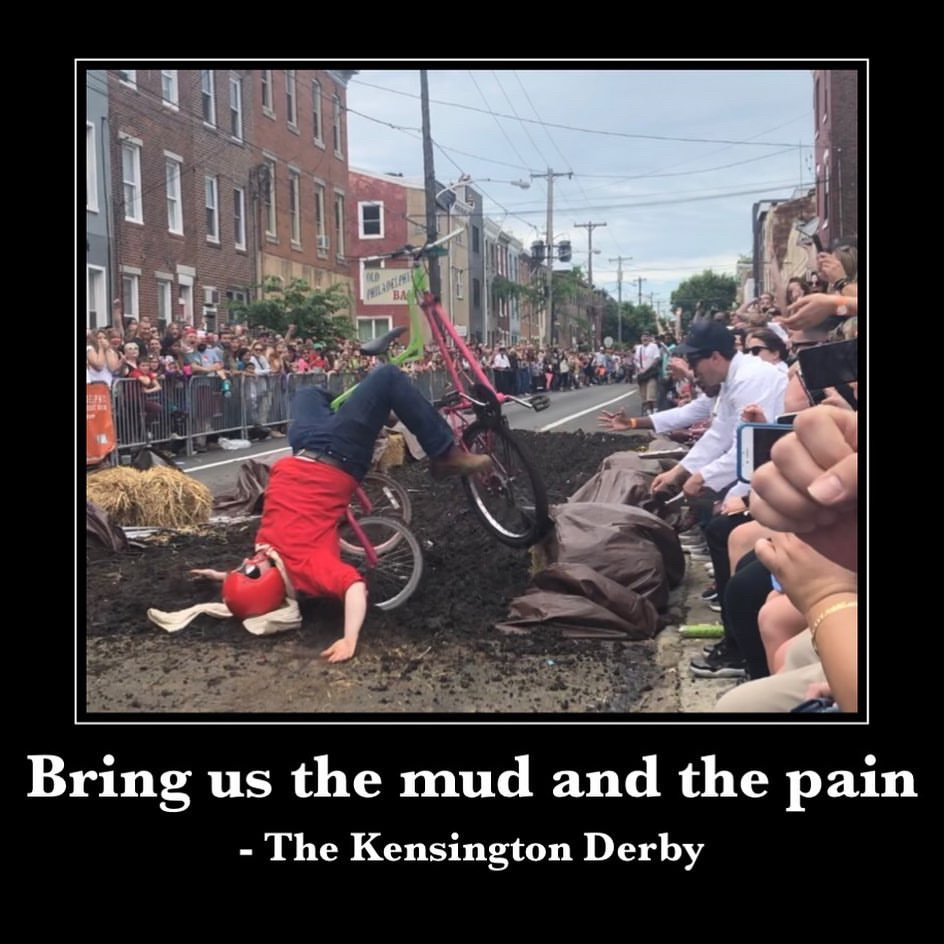